The Importance of Being a Student-Athlete 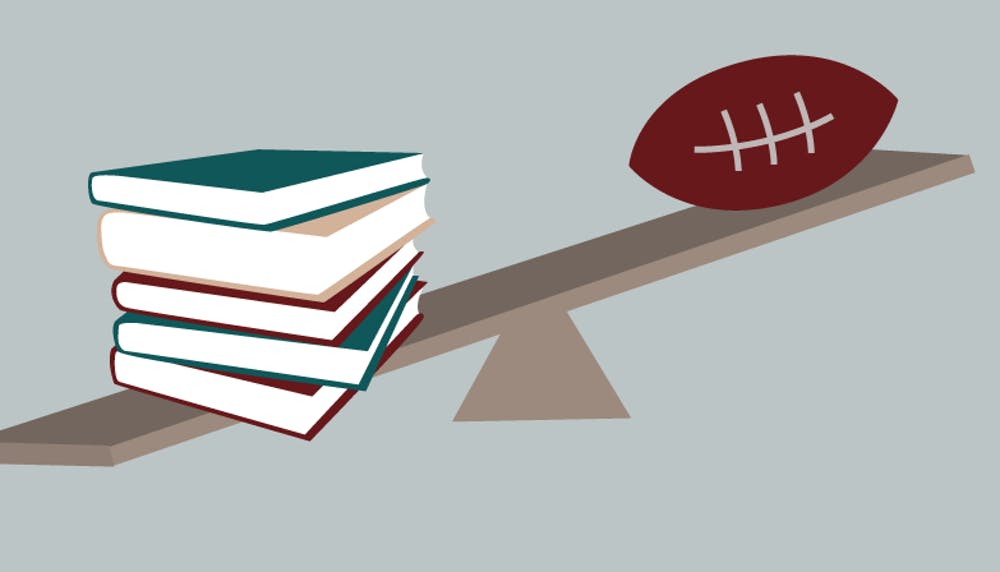 For as long as the game has been around, the perception of the football player is that they’re just a typical dumb jock.  Even in modern-day films and television shows, the football player is portrayed as a seemingly cognitively limited and aggressive individual that has nothing going on between their ears besides football. In reality, this couldn’t be farther from the truth, after all, the term is “Student-Athlete.”  Throughout high school, and especially in college, it was so important to me to try and eliminate that “dumb jock” stereotype.  Not to play the victim, but it was always so enjoyable to walk into a classroom and have a fellow student give a look signifying something like “you don’t belong in here.”  All that would do, not only for myself, but I’m sure for most student-athletes, is it would provide an extra sense of motivation to prove everyone wrong.  It would bring upon this mindset of, “Okay, I’m already out-working you outside of the classroom, now I’m going to out-work you inside of the classroom too!”  While this is the mindset that I was forced to develop by attending an extremely competitive school, the competitive mindset in the classroom is not as common amongst other athletes.

Unfortunately, oftentimes the notion that these individuals are, students before they are athletes, can get lost in the chaos of the season and thrown to the wayside.  Every young football player’s dream is to one day play in the NFL, but as the majority of us have come to find out, this dream, is in fact, oftentimes just a dream.  According to sportskeeda, there are roughly 1.1 million high school football players in the United States, and only around 6.5% of those high school players will go on to play college football.  The drop-off from college to the professional level is even more dramatic, as only around 1.6% of college-level players will get drafted into the NFL.  In short, roughly 853 players (0.00075%) make the pros each year out of an original population of nearly 1.1 million high school athletes (sportskeeda.com). In other words, one has a greater chance of being struck by lightning than making it to the National Football League. This is the reason why it is imperative for coaches to enforce the importance of academics; the dream of becoming a professional athlete is not always attainable, and oftentimes, players will need to rely on their brains more than their brawn.  On top of this, the facts provided are also the main contributors to the epidemic that is NFL players going broke after retiring, though that is a conversation for another day.

In the end, without being a student first, one is not eligible to be an athlete.  As former Division 3 athletes from Gettysburg College, our coaches preached the importance of academics. After practice during our freshman season, we would even be required to attend study hall in the library for a few hours. Keeping track of a player’s GPA and providing ample opportunity for them to succeed in the classroom is paramount. Coaches – it is imperative to express the significance of education to your players from a young age as it will set them up for the rest of their lives.